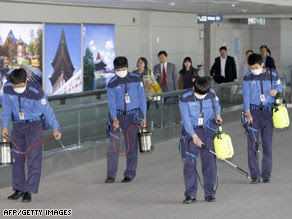 I've been writing about swine flu for several days and I wish to make one thing very clear: It is not my intent to increase national or global hysteria about swine flu. However, I want people to be aware of the POSSIBILITIES that may be associated with a true pandemic (which is another way of saying global epidemic).

Right now, we haven't even seen the tip of the iceberg. We're only seeing a tiny ice cube floating on the ocean. If things stay that way, then we have nothing to worry about. However, if things erupt around the world, then we'll see a massive iceberg come out of the sea.

I've been following swine flu on CNN and the latest is that there are 787 global cases of confirmed H1N1 and places like South Korea are sanitizing airports after a single identified case.

Meanwhile, the CDC is tracking the number of cases in each state. As of May 3, there are 226 cases. This means that almost 1/3 of the confirmed cases are in the USA. Why is that a big deal? Because people from all over the world travel to and from the USA. We are a major international travel hub. As the summer approaches, we will see a rise of tourists and other travelers. New York now has 63 confirmed cases. Yesterday, NY had 50. If there's one US city that attracts international tourists, it's NYC. We're already in May and schools are about to enter summer break. College students will be traveling home. We're about to see a major surge in domestic travel as well.

Anthrax was a scare, but it isn't transmitted as easily as the flu. SARS was a really big scare (especially because I knew friends living in Hong Kong), but Hong Kong isn't the type of major international travel hub like the USA.

Here in the U.S., we have a large supply of anti-viral therapies like Tamiflu (oseltamivir) and Relenza (zanamivir). Do other countries have the supply like we do? How much do these anti-viral therapies impact the course of the disease? It's probably too early to know the answer to that question. However, it may not be unreasonable to think that anti-viral therapy may be one of the reasons why mortality in the U.S. hasn't been as high as Mexico (but I don't have any scientific evidence to support that statement).
Posted by Unknown at 1:03 PM