Multi-Touch Screens on a Tablet PC 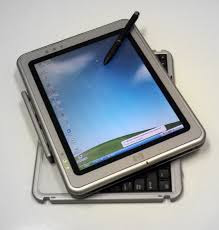 The phrase "multi-touch" has gotten confusing in the tablet PC industry. My Lenovo Thinkpad X200 tablet is considered to have a multi-touch screen because I can use my active digitizer pen or my finger as an input device. However, I can't use two fingers on the screen because it is a passive screen (not a capacitive touch screen like the iPhone or BlackBerry Storm).

I was walking through Best Buy today and I played with the convertible tablet PC made by HP. It was the HP tablet TX2Z that features a capacitive multi-touch display (which means that you can use two fingers on the screen and perform gestures).

Windows 7 will include the capability to use some of those cool multi-touch gestures. Apple already leverages this technology on the iPhone and on their MacBooks.
Posted by Unknown at 8:57 PM