Windows 7 Much Better than Vista and XP 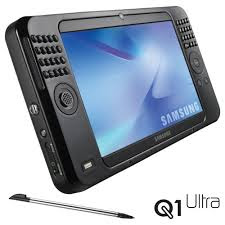 I didn't have high hopes for Windows 7. I didn't think that Microsoft could build an operating system that was more efficient than XP for slower machines like ultra-mobile PCs (UMPCs). For these reasons, I've been running Windows XP on my Samsung Q1 Ultra which has a very slow processor (single core, 800 MHz). It's not like my Lenovo Thinkpad X200 Tablet that has a blazing Intel Core 2 Duo processor.

My hat's off to you Microsoft. You've learned from your mistakes (and failures) on Vista and you've created a great operating system with Windows 7. I'm very impressed by the way that Windows 7 is running on my Ultra-Mobile PC (UMPC). I had tried a few of the earlier builds of Windows 7 on my Samsung Q1 Ultra and they were not better than Vista. However, the latest build of Windows 7 (build 7077) has been fast, efficient, and very responsive. If you're still running Windows XP, I urge you skip Vista and go to Windows 7.
Posted by Unknown at 1:13 PM