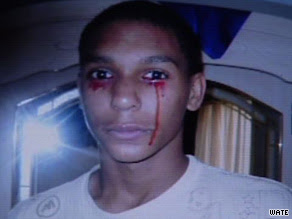 This is a very unusual case. Calvino Inman is a 15-yr-old teen who lives in Tennessee. When he cries, he cries tears of blood. According to this story on CNN: Dr. Barrett G. Haik, director of the University of Tennessee's Hamilton Eye Institute, says... "crying blood," a condition called haemolacria, is common in people who have experienced extreme trauma or who have recently had a serious head injury." The strange part is that Inman has no history of head trauma. So why would he be crying blood?

The CNN story also notes that Inman will under a psychiatric evaluation to rule out the possibility that he might be faking those bloody tears.
Posted by Unknown at 1:31 AM