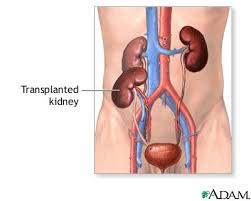 Who's had a kidney transplant? Which immunosuppressant drug are you taking? Here is the latest update from the FDA:

Class labeling changes are required for the following immunosuppressant drugs:

Information about the increased risk for opportunistic infections already is included in the labeling of the immunosuppressive drug Prograf (tacrolimus).

So who markets these drugs? Do you know?
To read the FDA alert, click here.
Posted by Unknown at 11:16 AM