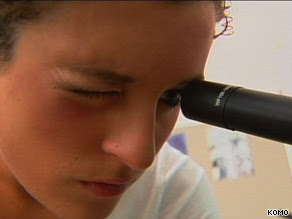 CNN has a very interesting story about a teenager named Jessica Terry who diagnosed her Crohn's disease in her AP (Advanced Placement) science class (called the Biomedical Problems class). She somehow got a piece of her intestine and was looking under the microscope when she saw a granuloma - a sign that she had Crohn's disease (a type of inflammatory bowel disease or IBD, not to be confused with irritable bowel syndrome or IBS. People get IBD and IBS mixed up all the time, so I had to clarify). Here's a snippet from CNN: "Crohn's disease is often misdiagnosed or diagnosed very late, says Dr. Corey Siegel, director of the Inflammatory Bowel Disease Center at Dartmouth-Hitchcock Medical Center in Lebanon, New Hampshire." In the case of Jessica Terry, she got her own intestinal biopsy slides and made the diagnosis herself! Read the full CNN story here.
Posted by Unknown at 10:00 AM