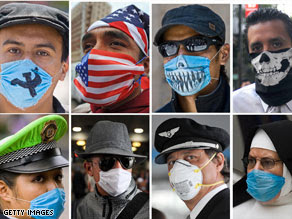 CNN is already reporting that health officials in North Carolina and Pennsylvania have confirmed the first cases of swine flu. Plus, Louisiana's governor said his state had seven confirmed cases of swine flu. These have not shown up on the CDC chart which was last updated today at 11 am Eastern.

Gregory Hartl, the WHO spokesman for epidemic and pandemic diseases, made this these comments in a briefing today (quotes appeared on CNN): "I ... would like to remind people that in 1918 the Spanish flu showed a surge in the spring, and then disappeared in the summer months, only to return in the autumn of 1918 with a vengeance... And we know that that eventually killed 40 million to 50 million people." Image source: CNN
Posted by Unknown at 10:49 PM