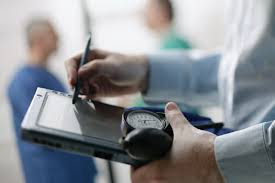 At HIMSS10, will most people refer to electronic health/medical records as EHRs or EMRs? My prediction is that those who have been in the health IT industry for many years may still be in the habit of saying EMR. Those who can quickly adjust to changing trends are probably using EHR given that this is the phrase used by the HHS and other major government organizations around "meaningful use."

Some people may argue that there is a technical distinction between EHR vs. EMR (and I would agree), but I'd say that the phrase "EMR" is dead in today's world of ARRA and HITECH (not to mention Medicare incentives around e-prescribing).  Companies that use the phrase "EMR" in their company or product names may wish to rename themselves using EHR instead of EMR.
Posted by Unknown at 1:49 PM