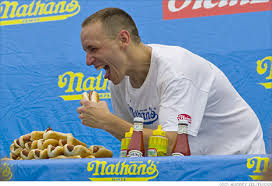 In a former life, I was almost a contest eater. Not for speed, but for quantity. That was a very long time ago. Do you ever watch those food eating contests? They are crazy! CNN has a story titled, "Speed eaters gain weight, clog arteries but have few regrets." Maybe they don't have many regrets while they're still young and relatively healthy, but this type of behavior can catch up to you, especially if you're Don Lerman who set a record by eating seven sticks of salted butter in five minutes. During six years of competitive eating, he gained 100 pounds! The average adult in the U.S. gains 1 pound per year. If you gain 100 pounds in 6 years, how many pounds are you gaining each year? (certainly you're above the mean)

In 2007, University of Pennsylvania School of Medicine doctors who specialize in gastroenterology and radiology conducted an experiment on the stomach activities of a competitive eater and an average eater. Do you know what they found? Competitive eaters lacked muscle contractions called peristalsis, which move the food down the digestive tract. The researchers published a paper where they warned about: possible "morbid obesity, profound gastroparesis, intractable nausea and vomiting, and even the need for a gastrectomy." Yikes!

I wonder what we're going to learn about competitive eaters over the next decade. If you exercise, can you eat anything you want to eat? Does exercise give you freedom to eat? (It does for me - that's why I can enjoy ice cream and be guilt-free). Read the CNN story here.
Posted by Unknown at 11:07 PM