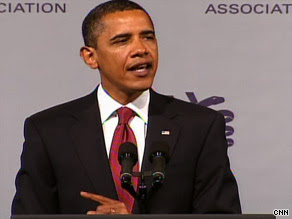 President Obama spoke about healthcare reform today. He is pushing for universal healthcare coverage and I agree that everyone in our country should have some type of coverage. According to CNN, "In a speech to the 158th annual meeting of the doctors' advocacy organization, Obama called an overhaul of the ailing health care system the most important issue for the nation's long-term economic stability... The AMA (American Medical Association) acknowledges the need for reforms but opposes any public option plan that forces physicians to participate, expands the fiscally challenged Medicare program for senior citizens or pays Medicare rates."

So what type of reform will we see? I hope we see some significant reform in medical malpractice so that physicians no longer need to practice "defensive medicine" and order a battery of unnecessary tests. What will a public health insurance plan look like? I doubt we'll resemble Canada, but maybe it will mirror some of the things we currently see in the VA (Veterans Affairs) health system. Some type of health coverage is better than no coverage. Image source: CNN