Risk of Stroke or Bleed? 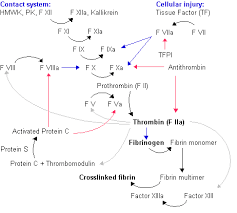 Would you rather risk a stroke or a bleed? A massive hemorrhage? Well, if you put it that way, then maybe it's too obvious.

When I was in medical school, the standard treatment for atrial fibrillation anticoagulation was either warfarin (Coumadin) or aspirin (for those who can't take warfarin or for those who have a relatively low risk for embolic stroke). Warfarin acts on the coagulation pathway by inhibiting factor VII. Aspirin acts on platelets - and doesn't act on the coagulation cascade. (I realize that I may be over-simplifying this, but this is a blog and not a scientific textbook so I hope you'll bear with me). Plavix (clopidogrel) also acts on platelets and doesn't act on the coagulation cascade. Does it make sense to combine asprin and Plavix to prevent embolic stroke in patients with atrial fibrillation? In medical school, I would have answered "no" because neither aspirin nor Plavix work on the coagulation cascade. They don't interfere with fibrin, thrombinogen, Protein C, or thrombin. So

A recent edition of the NEJM has an article titled, "Effect of Clopidogrel Added to Aspirin in Patients with Atrial Fibrillation." The ACTIVE Investigators wanted to know what would happen if you add Plavix to asprin in patients who have atrial fibrillation. Here's what they found (in a nutshell): "In patients with atrial fibrillation for whom vitamin K–antagonist therapy (they're referring to warfarin) was unsuitable, the addition of clopidogrel (Plavix) to aspirin reduced the risk of major vascular events, especially stroke, and increased the risk of major hemorrhage."

So, would you rather risk a stroke or risk major hemorrhage?
Posted by Unknown at 7:27 AM