Should We Really Be Worried About Swine Flu? 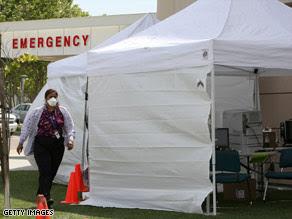 According to CNN, ERs are getting flooded with patients who think they may have swine flu. Overcrowding problems have forced some hospitals to set up tents outside for patients. We see people wearing masks everywhere. Are people overreacting? Are we in a panic mode?

Some may argue that swine flu really isn't a big deal. After all, 5% to 20% of U.S. residents get the flu, and more than 200,000 persons are hospitalized for flu-related complications each year. About 36,000 Americans die on average per year from the complications of the regular flu, so what's the big deal about swine flu, right? Let's take things into proper perspective here.

H1N1 - Mexico has reported 397 confirmed human cases of infection, including 16 deaths. We know that these numbers only reflect confirmed cases, so there are many more who are simply "unconfirmed" at this point.