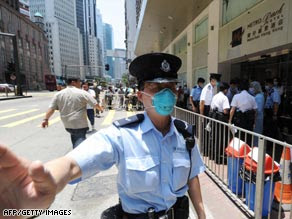 If you live around many Asians, you probably know that Kim is a very common last name for Koreans. In fact, it's the most common last name in Korea. Speaking of Korea, CNN reports that the first reported case of swine flu in South Korea has occurred. We don't have a name, but the person is a 51-year-old nun who recently traveled to Mexico for volunteer work.

Swine flu has also hit China. A hotel in Hong Kong has been quarantined because a guest was found to be infected with swine flu.

So should we be worried? We should definitely be concerned and I think we also have to seriously consider the strong possibility that a pandemic will occur. Image source: CNN
Posted by Unknown at 3:47 PM