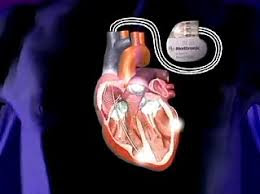 Some people out there rely on a pacemaker to survive. Others may have a pacemaker as a "backup" in case their heart rate drops or does something funny. Medtronic has warned physicians that 37,000 Kappa pacemakers may have a defect which can cause the battery to stop working. Since the pacemaker is under the skin, it's not easy to go in there and change the battery.

I wonder what pacemakers will look like in the future. You'd have to think that with advances in medical technology, we may come up with a self-powered pacemaker that doesn't rely on a battery, right? I bet that in the future we'll see doctors regenerating the sinoatrial node (SA node or sinus node) in a Petri dish and transplanting that into a heart. That will be called a "pacemaker transplant" and we won't need battery-powered devices anymore.

According to Medtronic CEO Bill Hawkins, "most" of the defective pacemakers were distributed overseas. I'm sure many people want to know what "most" means. I also wonder if this is related to the fact that Medtronic is cutting 1,500-1,800 jobs.
Posted by Unknown at 1:00 AM