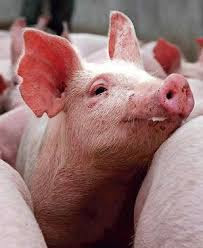 Swine flu is getting really serious. If you live in Texas, you need to on alert. According to CNN, he federal government has declared a public health emergency because of the increasing number of cases in the USA. More people are wearing masks to protect themselves and people in Mexico are being told not to kiss because of the possibility of infection. Over 80 people have died in Mexico from swine flu. The H1N1 strain is usually only found in pigs, but it's somehow managed to infect humans. We heard quite a bit about bird flu and the H5N1 virus a few years ago, and now in 2009 the big fear will be swine flu. We may still hear about bird flu this year.

There are now 20 confirmed cases of swine flu in this country. Swine flu essentially mimics other viral infections that cause the flu, so it's difficult to differentiate this infection from a common cold or flu. Let's hope and pray this gets controlled quickly.
Posted by Unknown at 1:28 PM