A walk through history - my personal computing experiences 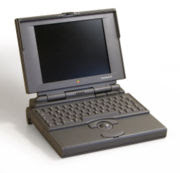 My first laptop was a Mac. If my memory serves me right, it was an old Apple (Macintosh) PowerBook 150 series that had a 33 Mhz processor, a 640x400 grayscale screen, a hard drive that was smaller than a ZIP disk, and a 1.4" floppy disk drive. No CD-ROM, No DVD, No USB, No Firewire. However, the thing was built like a tank and I used it for several years.

I also used Unix-based systems and Windows 3.1, but my PowerBook was my main computer.

However, since the mid-to-late 1990's, I've been primarily using Microsoft 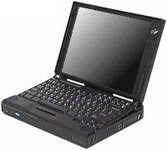 Windows. I started with Windows 95, then upgraded to Windows 98. I also played around with NT. I never had a chance to use Windows 2000 or Windows ME very much.

When I first started using Microsoft Windows, I primarily used IBM Thinkpads. My first Thinkpad was the 760 and the keyboard actually flipped up and opened the entire laptop so that you could replace the battery, switch the CD-ROM drive, or change the hard drive. The tilting keyboard didn't catch, since it was never used again on future models.

When XP came out, that was a huge improvement in performance and reliability. I experienced fewer episodes of the dreaded "Blue Screen of Death" (BSOD) running XP. It's hard to believe that XP came out in 2001 - only 1 year after Windows 2000 and Windows ME.

Now that Vista is here, I have several machines running XP and Vista (dual-boot). I mainly use XP because of performance and reliability issues. Now there are circulating rumors that Windows 7, the next version of Windows, may be released next year. What does that say about Vista? Was Vista such a flop that it won't have the longevity history of XP?

XP proponents are also fighting hard to keep XP on the shelves. According to Microsoft, they plan to keep XP around for ultra-low-cost PCs. What about for ultra-compact or ultra-low-power PCs that need a minimalistic operating system?

In my opinion, XP has been the best operating system released by Microsoft. It's so sad to see people buying PCs that have Vista pre-loaded, and switching these machines to XP. I would have never done that with XP and Windows 98! What does this say about Windows 7?
Posted by Unknown at 9:27 PM