Some Fitbit Force users reporting a rash on the wrist

This was originally published by FitnessTechMD.com by @DrJosephKim

The Fitbit Force is newest wearable activity tracker that Fitbit released last fall. Similar to the Fitbit Flex, the Force is worn on the wrist and it includes a digital display that shows the time, your steps, distance, calories burned, and more.

Gadgets like the Fitbit Force were very popular over the Christmas holiday as people made weight loss goals for 2014.

Some Fitbit Force users have been reporting a rash on their wrist. The rash is thought to be contact dermatitis due to nickel, so if you have a nickel allergy, you may want to avoid the Fitbit Force. 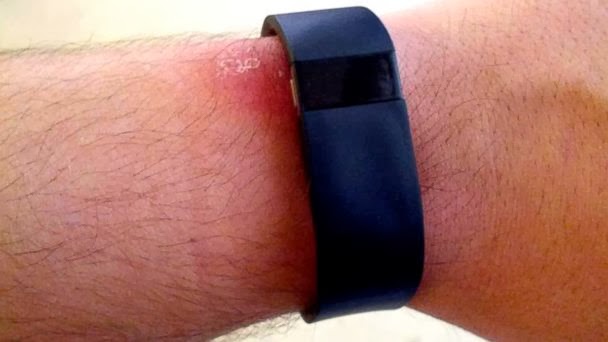 How do you know if you have a nickel allergy? Have you ever noticed a rash where some metal on clothes (like a button) has caused a rash on your skin? Some people report a rash on their waist from their pants button. Other people develop rashes when wearing certain types of metal jewelry.

The Fitbit Flex (which lacks the metal component and the display) hasn't caused any contact dermatitis rashes from metal because there is no metal that touches the skin.

If you're experiencing a rash from your Fitbit Force, contact Fitbit.
Posted by DrJosephKim at 7:00 PM