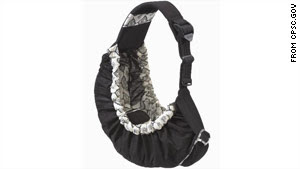 I actually bought a baby sling for my wife a few months ago. She tried it for a day and didn't like it, so I returned it to Babies R Us. It's hard to imagine what it must be like to grieve the loss of a baby.

There's a story on CNN titled, "Grieving mothers blame baby slings for infant deaths."  Here are the story highlights:
According to the article: Earlier this month, the U.S. Consumer Product Safety Commission issued a warning about the use of certain baby slings, saying it had identified 14 deaths with sling-style carriers, most of them in children younger than 4 months. On Tuesday, Health Canada issued a joint statement with the agency, saying three of the deaths appeared to occur in one of Infantino's slings.
Posted by Unknown at 10:19 PM