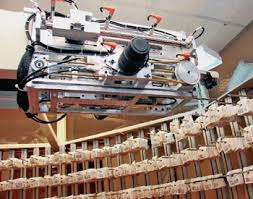 I love robots. R2-D2 from Star Wars is my favorite robot. When I retire someday, I'm planning on building a full-size R2-D2 that will move around my house and fetch me my slippers.

We're seeing more robots in the hospitals. Most of these won't be roaming the halls (except for the slow robot that delivers the mail), but quite a few are being used to dispense medications and to perform other tasks in the inpatient setting. A few months ago, Forbes had an article titled, "R2-D2 Has Your Pills." They mentioned how the Robot-Rx (medication-dispensing robot made by McKesson) is being used in a John Muir hospital to reduce medical errors related to drug dispensing. According to that article:


McKesson has installed 400 medicine-dispensing robots at hospitals around the country. They cost between $750,00 and $1 million. McKesson builds the robots at a factory in Pittsburgh, PA.


Speaking of robots, I'm still waiting to see some iRobot Roomba and Scooba robots in the hospitals. They're great for floor cleaning. Speaking of iRobot, did you know that several members of the management team and Board Members are MIT graduates? No surprise, is it? Sometimes I wonder what my life would have been like had I pursued a career in robotics and biomechanical engineering.