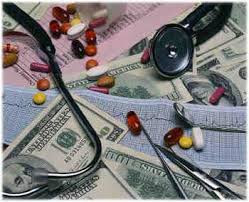 We all know that the Senate passed a historic health care reform bill. It's hard for me to imagine $871 billion. According to CNN:


The bill passed in a 60-39 party line vote after months of heated partisan debate. Every member of the Democratic caucus backed the measure; every Republican opposed it.


Will it become law? Probably. Will it raise taxes? Yes. Will it reduce health care costs? No one really knows the answer, but there are many people who don't seem to think so. What do I personally think? I think that it depends on too many unpredictable factors at this point. We know that everyone needs health care, but we don't know how doctors are going to respond to this type of reform. If doctors choose not to accept certain types of health insurance policies, then we'll be stuck in a worse situation than ever before.

It's hard to believe that Medicare and Medicaid was enacted over 40 years ago. Now, we're about to see Medicaid get a massive expansion, but what good will that do if more physicians choose to drop Medicaid coverage? There are so many unanswered questions for practicing physicians in the United States. My personal prediction is that many more physicians will choose to drop Medicare/Medicaid and they will rely more on cash-based practice models. A large number will simply leave clinical practice to pursue other careers.