What's the fate of the public option? 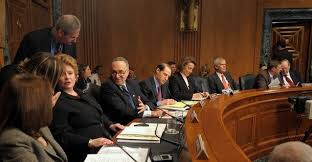 The public option was rejected by the Senate Finance Committee. According to CNN:


Republicans unanimously oppose the government-run insurance option, saying it would drive private insurers from the market and eventually bring a government takeover of the health care system.


Who's right? Is the public option simply a battle between the Republicans and the Democrats? I don't think it's that simple when we're talking about healthcare reform. Should they define a trigger? If they define such a "trigger," they will have proof that expanded coverage and lower costs are not possible unless major changes are made to our existing system.

At the end of the day, I think we will eventually see some type of public option emerge in the United States. In my opinion, it's inevitable. Our healthcare system is so broken that we need to go through a major overhaul. It's difficult to overhaul a system in small stages. On the flip side, a complete overhaul isn't practical. So, we're stuck between a rock and a hard place. This is a true dilemma.
Posted by Unknown at 12:02 AM