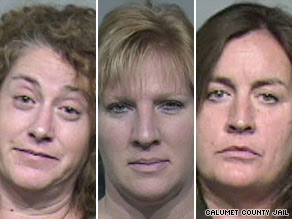 I don't really know how often this happens. Three women (one was the mans' wife) apparently decided that they wanted to teach one man a lesson. According to this story on CNN, three women were upset by the fact that this one man was having sexual relations with all three of them (I'm sure the wife was quite upset). Therese Ziemann, Wendy Sewell, Michelle Belliveau and the man's wife are accused of felony false imprisonment, which carries a maximum penalty of six years in prison. We don't know the name of the man's wife because CNN does not name victims of alleged sexual assault and will not name the alleged victim's wife since they use the same last name.

One of the ladies texted the other women to let them know "he's tied up." I wonder if they uploaded any video clips to YouTube.

According to CNN, after the other women arrived (he was tied up), they peppered him with questions like, "which do you love more?" and "who do you want to grow old with?" Here's a memorable line from CNN: One of the women "told police she slapped her lover and asked "can you handle that?" before using Krazy Glue to stick his penis to his stomach."

Do you think this story will deter people from being unfaithful?
Posted by Unknown at 9:42 PM