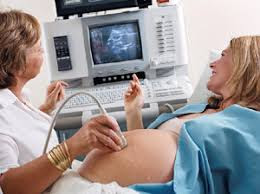 I'm a medical technologist, so this is pretty exciting. A new type of fetal heart monitor could save the lives of unborn infants in complicated pregnancies. Results were recently published in the International Journal of Engineering Systems Modelling and Simulation.

Here are some interesting snippets:

A.K. Mittra of the Department of Electronics Engineering, at the Manoharbhai Patel Institute of Engineering & Technology, in Gondia, India, and colleagues have developed a simple device based on a two-microphone system that can monitor fetal heart rate during the mother's rest times and sleep and send an alert to the woman and her physician.

They have now developed a device based on two small acoustic sensors that can easily monitor fetal heart rate and feed the information to a wave analyzer in a bedside personal computer connected to the internet. The first microphone is attached to the mother's abdomen to pick up the sound of the fetus' heartbeat, the second is attached at a reasonable distance to pick up ambient and bodily noise.

The team points out that they have successfully tested their monitoring system on several women at various stages of pregnancy. They also emphasize that the system is a passive one, in which no energy penetrates the mother's womb at any point. The technique is also inexpensive, although it does rely on the mother having access to a personal computer and an internet connection.

There's nothing more scary than dealing with a complicated pregnancy. When a pregnancy goes smoothly, people often take that for granted. They fail to realize that millions of babies are lost due to complications that range from unpreventable to preventable conditions. Let's hope that advances in medical technology lead to improvements in pregnancy outcomes.
Posted by Unknown at 1:22 AM