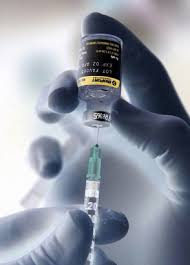 The disturbing truth about swine flu is that it may kill hundreds of thousands of people in the U.S. this fall/winter. According to a recent story on CNN, the estimated number of deaths is 90,000. That's not an insignificant number when you consider that the seasonal flu kills roughly 40,000 each year. Although several vaccines against H1N1 are currently in development, they probably won't get released to be very helpful. As a result, many patients may choose to refuse the vaccine because they may think that the vaccine won't have any beneficial effect to protect them. The reality is that they should probably still get the vaccine because you never know if you'll get infected early or late in the flu season.
There's no doubt that this fall/winter will be very busy for hospitals, emergency rooms, and primary care offices. Avoid the hospital unless you really need to be there. Wash your hands at every opportunity and carry and use hand sanitizers. Let's see how schools get affected as students get ready to return to the classroom later this month and early next month.
Is your workplace prepared to handle the swine flu pandemic? Read the CNN story here.
Posted by Unknown at 12:30 AM