Do You Have Cell Phone Elbow? 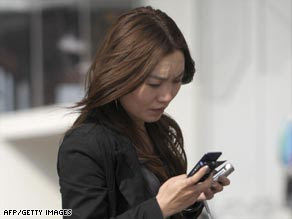 CNN has a story about a phenomenon called "cell phone elbow." Instead of focusing on the thumb, fingers, hand, or wrist, this story focuses on the elbow.

You may have heard of BlackBerry Thumb and even PDA Nail. But have you heard of cell phone elbow? To the medical community, this may be called: cubital tunnel syndrome (no, not carpal tunnel which is in the wrist/hand area).

Cell phone elbow (or cubital tunnel syndrome) occurs when a nerve in the arm gets damaged because you're tightly bending your elbow for long periods of time. As a result, you may get numbness and tingling in your pinkie and ring fingers (which nerve is being pinched? Answer = ulnar nerve). According to Dr. Peter J. Evans, the director of the Hand and Upper Extremity Center at the Cleveland Clinic in Cleveland, Ohio, cell phone elbow "could impede your typing ability, your writing ability." In other words, it could get very serious.

The tips provided in this article include the following:
Image source: CNN
Posted by Unknown at 1:06 PM