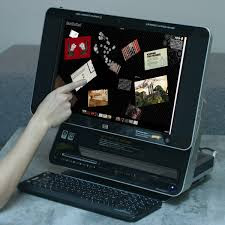 Kids with autism typically struggle in three areas: socialization, communication, and behavior. Touch-screen computer technology may be instrumental in helping kids with speech. NBC Bay Area News reports that Hope Technology school in Palo Alto California is using HP TouchSmart PCs to help children with autism. Kids are touching the screen to communicate short messages. Those machines were donated to the school by HP when executives found out that the school had lost all its PCs to theft. Now, these touch-screen computers are helping autistic children communicate. Who needs keyboards when you can simply touch the screen? I'm predicting that future computers will be primarily driven by voice recognition and touch screen. The keyboard will be a thing of the past.
Posted by Unknown at 11:48 AM