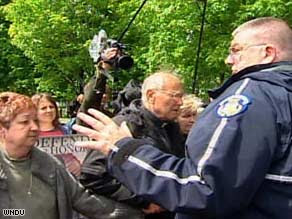 May is a busy month because of all the graduation ceremonies that are taking place around the country. I remember when President Clinton spoke at MIT a number of years ago. This year, President Obama was at Notre Dame and his commencement speech on abortion issues stirred quite a fuss according to CNN.

CNN reports that 39 people were arrested, including Norma McCorvey who was the plaintiff identified as "Roe" in the Supreme Court's 1973 Roe v. Wade decision that struck down state laws banning abortion. I wonder how many people know that McCorvey became a pro-life Christian in 1995 and now has a pro-life ministry known as Crossing Over Ministry (McCorvey was initiatied into the Catholic church in 1998).

Abortion continues to be a very heated topic in the world of healthcare, ethics, politics, and religion. We all know that President Obama is a supporter of abortion rights and federally-funded embryonic stem-cell research. Many Catholic voters (especially those who attend regular services) were opposed to having President Obama speak. Notre Dame President John I. Jenkins noted in a statement in March that the invitation does not mean the university agrees with all of Obama's positions. President Obama also received an honorary degree from Notre Dame and this seems to have caused even more controversy! Image source: CNN
Posted by Unknown at 9:16 PM