The ACLU Sues Over Patents on Cancer Genes 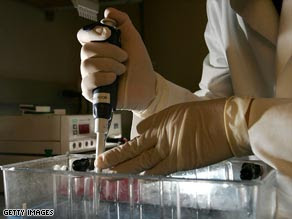 CNN: "Patents on two human genes linked to breast and ovarian cancers are being challenged in court by the American Civil Liberties Union (ACLU), which argues that patenting pure genes is unconstitutional and hinders research for a cancer cure." According to the ACLU, "Myriad's patents give it exclusive right to perform diagnostic tests on the genes -- forcing other researchers to request permission from the company before they can take a look at BRCA1 and BRCA2."

What do you think about this?

Scientists are identifying more cancer genes all the time. We already know that several forms of breast and ovarian cancers are linked to specific genes (like BRCA1 and BRCA2) that can be detected through special genetic tests. Oncologists and geneticists often struggle with the ethical dilemmas that frequently complicate genetic testing. Image source: CNN
Posted by Unknown at 10:44 PM