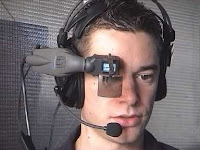 After that last post about the "carry a desk," I thought about my times at MIT. I've seen MIT students walking around with wearable computers on their bodies. They even have a lab at MIT called the BorgLab. Unless you've watched Star Trek, that term won't mean anything to you. For the rest of you Trekkies, yes - people do walk around the MIT campus looking like the Borg. Unfortunately, I never became one of them. I suppose resistance isn't futile after all.
Posted by Unknown at 10:25 PM